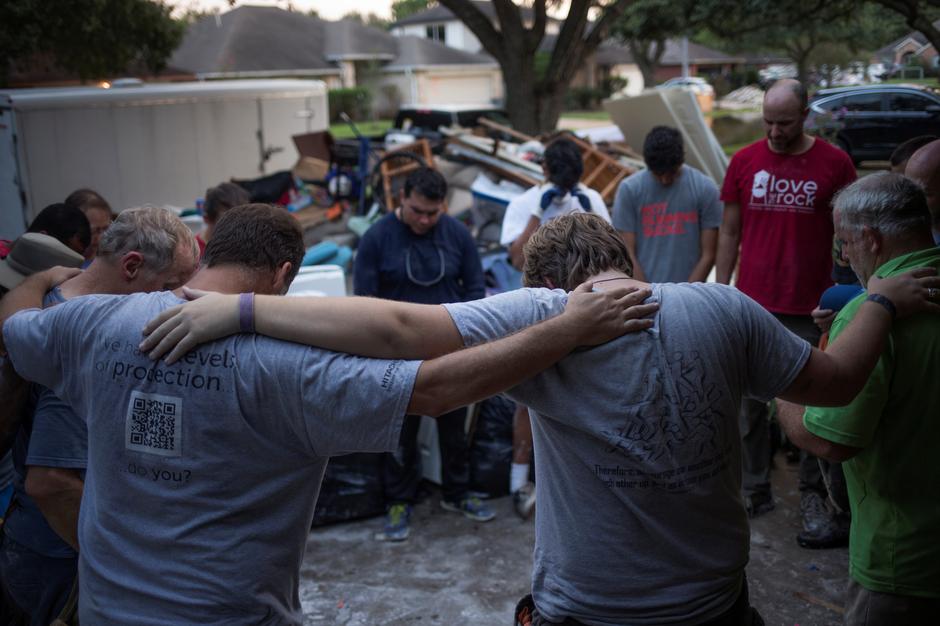 Someone said that the sovereignty of God is best seen in the review mirror. I love that analogy. More often than not, God’s glory, power, grace and tender mercies are best seen post, tragic events like a Hurricane Harvey or Irma, or in cancers among other faith tests, trials and tribulations.

I’ve already experienced little evidences of God’s common grace and the love of the common man- fellow image bearers coming together in community with acts of love and service in just the 48 hours of the aftermath of Hurricane Irma, the largest and most powerful storm to pass through and near parts of south and western Florida in nearly a generation.

Millions of Floridians are living through another day without electricity as of this post, with the Florida Keys having borne the brunt of the storm’s wrath, with widespread destruction in the low-lying islands. Gov. Rick Scott toured the area by air early this week and described “devastating” damage. At least six people died as a result of the storm and another two dozen plus as the result of this storm’s impact on Cuba and other Caribbean islands.

All this on the heels of Harvey’s mayhem in Texas and a massive earthquake in Mexico, which has claimed more than 60 lives thus far. However, Florida weathered Irma much better than expected, with most areas escaping the widespread destruction forecasters feared. Why?

It would be more than presumptuous for anyone- Christians included, to attempt to read the mind of God and his precise providence over these events, all occurring near a relatively quiet observance of the 16th anniversary of the 9-11 terrorist attacks on the United States.

What I Do Know

As we mentioned in our last post (Why Hurricanes and Suffering?; Sept. 5), Jesus Christ laid a most provocative answer on those that questioned him in Luke 13:1-5, as to the rationale of a violent massacre and the fall of a tower which killed (seemingly random) 18 persons in Galilee. The answer to the question that previously unconfessed or unforgiven sins must have led to the demise of the relatively innocent, was met this way by King Jesus, who simply said, “No, I tell you; but unless you repent, you will all likewise perish.”

“Perish” in this context means judgment and eternity. So, that pretty much deals with the why and providence question doesn’t it? Jesus’ point implies that one’s relationship with God and their eternal future is far more important than the circumstances of our death on earth in this lifetime.

Life and eternity come into much larger focus in such times of suffering and uncertainty do they not? Therefore, opportunities to show and share Jesus as reality, truth and light in a dark world increase proportionately in times like these do they not? Is there a coincidence there? Obviously not.

I know that I have reconnected and reestablished relationships with neighbors this week – mostly all unredeemed, that I would not have otherwise, were it not for the fact I needed to cut and clear tree debris with them in order to make our streets and homes safer, all as the result of a Hurricane virtually landing in our laps this past Lord’s day.

Leave it to our Lord to work providentially in such a way as to bring communities together in ways they would not in the flesh. Unfortunately, from my point of view, it took a storm and neighborhood damage to show the love and gospel of Christ through acts of kindness and service. Fortunately, from God’s point of view, the love of neighbor in the aftermath of a storm is best seen through the rearview mirror.

Federal officials warn drivers in the Southeast to prepare for gas shortages after Harvey and Irma’s disrupting one-two punch to the nation’s fuel supply, as Irma continued to wreak havoc on its march north, buffeting Georgia’s coastal areas and metro Atlanta with high winds and heavy rainfall. More than 1.2 million people in Georgia are waiting to have power restored.

How many of them are born-again believers and disciples of Jesus who are prepared to bring food and water to a neighbor, or cut and clear tree limbs and repair fences because Jesus told them to?

Forget for now trying to figure out exactly why God drove these storms and similar calamities to lands near and far. But rather, let’s roll up our sleeves, and show the world how much we love God by loving people and point them to Jesus when they ask why. Then look for God’s providence and answers to the big questions in the rearview mirror.